David Cameron, current British PM delivering a speech in the British room of the European Council in Brussels (Belgium)

Yesterday, the House of Commons rejected an amendment proposing a referendum about the British adhesion in the European Union. If the outcome was excepted, some Tories MPs decided to vote in favour the proposition, disobeying to the David Cameron’s instructions. Thus, although the vote was purely consultative, the behaviour of 1 out of 4 Tories MPs sums up the uneasiness of the British elite vis-à-vis the European integration and the European Union.

Should UK quit the Union? This is the constant debate existing on the other side of the Channel since the beginning, which is to say since the integration of the Kingdom to the EU in 1973. In 1975, the British citizens had already answered positively for the maintaining in the Union. Nonetheless, the Brits remained largely euro-sceptics, still considering Europe as a disadvantage than a big asset.

Should UK go? The question must be asked in another way. Indeed, the issue is not if Britain must stay in Europe but what Britain concretely does within the European integration and what is its added value. From there, the main issues of the debate are not the same anymore.

In fact, the British behaviour towards Europe is quite ambiguous and hard to understand, finally. Considered as too much supranational and interventionist, Europe should be, according to our best enemies, minimalist, behave as a compass orientating the Member States. Although it’s partially the case, some Brits are still not satisfied and the current crisis emphazises the situation and also their mistrut vis-à-vis Brussels. 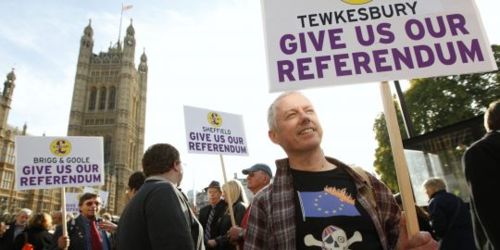 David Cameron, it’s well-attested, is not known to be a convinced pro-European. Indeed, when he was in the opposition leader, he strongly criticized the British European policy, even considering he was ready to submit a referendum, if he became Prime minister. Nonetheless, the Tory leader is not stupid, far from it and is aware of the strategic importance of the Union for the Island, once he came to power. Cameron is very aware of this, the national interest of UK is to be inside the Union, not outside. In other words, leaving is the Union is not the solution, a conclusion even shared by William Hague, the very euro-sceptic Foreign Affairs minister, probably by pragmatism.

Which maybe explains the current attitude of the Prime towards the Eurozone decisions, a question of posture rather than a real expressed concern. Cameron has to give some guarantees to his supporters but also ensure an opinion more and more desirous to have their say and very divided as far as far the belonging of UK within Europe and its future are concerned. Indeed, according a Guardian survey, 70% of the Brits would wish a referendum in which 49% would vote for the withdrawal against 40%.

Should UK stay, should UK go? Not for the moment and probably never. UK, despites his grand gestures, knows very well it has more to lose than to win, if it decides to leave the ship and retake its liberty. In fact, Great Britain is more useful and effective having a nuisance role, which allows it, thanks to this, to exist and to influence the European integration. In other words, Cameron and the euro-sceptics Tories MPs make a lot of fuss about nothing, as usual! 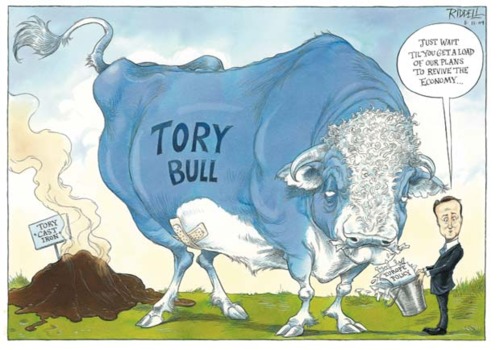