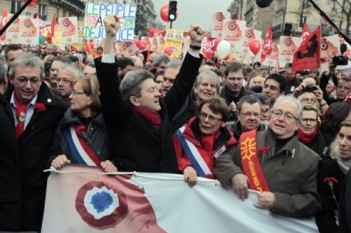 Jean-Luc Mélenchon, the FdG leader and candidate to the French presidency during a march in Paris, on March 18th

Slowly, Jean-Luc Mélenchon has points in this presidential campaign. Slowly and increasingly, he seems to be the revelation of the 2012 race to the Elysée Palace. He also seems to embody a radical left, deeply wishing to get another direction for France.

The Front de gauche (Left Front, FdG) candidate now gets 14% of the votes and even seems to be in third position according to a recent opinion poll. Such results make the former socialist senator and his supporters happy and some of them are even dreaming about a run-off with Nicolas Sarkozy.

The François Hollande’s staff reacted to the current breakthrough of Melenchon. According to Jean-Christophe Cambadélis, MP of Paris, the current score of Melenchon is quite normal and positive. In other words, if his increasing must be regarded, it is not a threat however, in a short-term at least.

Nonetheless, François Hollande insisted on the necessity to vote for him at the first round again vis-à-vis the ones who would be attempted or attracted by the Melenchon’s speech, as he recently did at Bondy (suburb of Paris). Indeed, ten years ago, Lionel Jospin – the former Prime minister and socialist candidate – lost the presidency after the first round because of a spread of the left votes between several candidates.

May the progress of Melenchon cause some problems for François Hollande? Apparently yes if we look at the opinion polls in which François Hollande seems to experience a weak progression. What is more, the Melenchon’s Manifesto seems to be largely different with Hollande’s one, apparently! 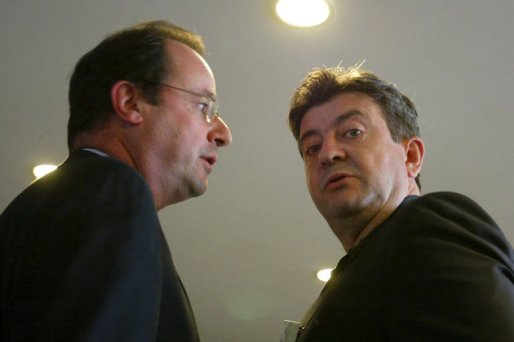 Nonetheless, the progression of Melenchon is not so problematic for Hollande. It even may be an asset insofar as roles are shared between the socialist and the radical left candidate. A realist speech for Hollande and a utopian one for Melenchon. Such a speech – we appreciate or not – satisfies and is attracting people who voted for the extremes before, which also explains the almost-absence of Nathalie Arthaud and Philippe Poutou (the far-left candidates) and the decline of Marine Le Pen among the workers mainly.

Furthermore, it is in the interest of Hollande Melenchon makes a breakthrough, in the forecast of the run-off. Indeed, the socialist candidate could benefit important votes from the FdG and a larger electoral basis as a recent opinion poll led by Ipsos Logica for the weekly Nouvel Observateur reminded. According to the study, the votes favourable to Melenchon are stronger in some non-privileged social classes of the French society, the main stake of this election. These social groups are sensitive to the Melenchon speech and want to make their voice heard during this election. So, less than a problem, Melenchon might be useful when this one asks his supporters to vote François Hollande for the run-off.

At last, there is still a political interest in the framework of the legislatives of June in which the French Communist Party (PCF) – member of the FdG – has some interests to conclude a deal with the Socialist Party to get a parliamentary group in the French Assembly. As, the political scientist Gerard Grunberg explains: “there exists a difference between Jean-Luc Mélenchon and the French Communist Party which needs to be made. For Mélenchon, it is a personal issue. It is about him and the presidential election. He considers himself as a plebs orator as Maurice Thorez in 1936 and does not hope to get a position necessarily. On the contrary, the Communists consider the situation differently: they want a parliamentary group and why not ministers if we refer to Pierre Laurent, the French Communist Party leader”. In other words, when Jean-Luc Mélenchon is in a short-term prospective, his communist partners are in a long-term one, which supposes good relationships and an agreement with the Socialist Party especially, even if it means calming Melenchon down in backstage.

So, the current breakthrough of the FdG, if it may be an issue for Hollande now, might be very useful for the socialist candidate in term. Contrary to Nicolas Sarkozy, Hollande knows he will be able to count on the Melenchon’s voters who will come to the poll station on the behalf of their hate for the outgoing candidate. The remaining issue is to know if Melenchon will able to resist to a probable exhilaration of the intentions polls, in order to not miss the good target.