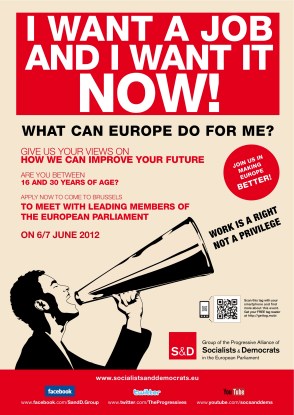 On the last 6th and 7th of June, I went to Brussels to attend to a conference about youth employment in Europe organized by the Socialist and democrat group in the European Parliament.

More 250 young people, coming from most EU member State, participated to the conference and expressed their concerns, wishes and especially what they expected vis-à-vis the employment situation and inclusion in Europe. During these two days, we could exchange and oppose our point of views with diverse national and European leaders as Nicolas Schmit, Luxembourgian minister for Employment and Immigration, Laszlo Andor, European commissioner for Employment, Social Affairs and Inclusion, Thiébaut Weber, president of the European Trade Union Confederation Youth Committee; and Héla Khamarou, Généaration Pécraire member.

The conference was important and useful insofar as it was the first time such an initiative was organised by a European political party. Indeed, the youth employment issue is and still is a burning issue for the EU Member States but also for the whole European Union and in which the impacts on the credibility and the future of the European integration are not regarded enough. For a long time, solutions remained national they have to shift to the European level now.

Participants with Sergei Stanishev, interim PES president and Zita Gurmai, Hungarian MEP and PES Woman President, at the end of the conference, the 7th of June (European Parliament, Brussels)

It’s to reach this objective, after two days of discussions, we, the participants, wrote an appeal to the EU Member States heads of State and government to these ones really put the youth employment in the agenda, in the current EU 2020 Strategy mainly. Fifteen proposals were made as a better solidarity between generations, a better way in to employment, a strengthen investment policy or the implementation of a European youth guarantee allowing to a graduated to benefit a professionalizing training and a job at least four months after the completion of his studies, as it current exists in Austria and in Luxembourg and Finland, soon.

The youth employment policy must be regarded better and at the heart of the EU Strategy, in the context of the crisis mainly. Thus, a real answer must be done vis-à-vis the current generation who can’t bear the ravaging effects of employment anymore, reinforcing euro-scepticism and distrust towards EU institutions. The S&D conference – in the framework of the Party of European Socialists campaign on youth employment – is a first and essential step to such an issue has an solution not only at the national level but also at the European one.