It’s a surprise. A big surprise.

The latest European Council of Brussels finally reached an agreement, snatched from Germany while a failure (or a semi-failure) was expected. 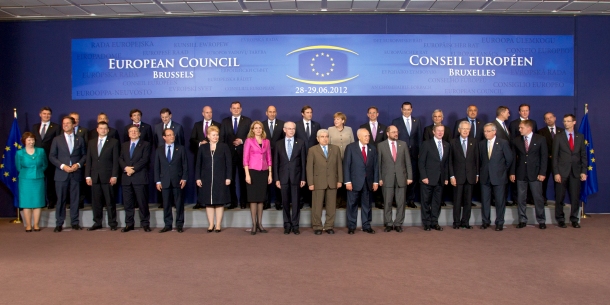 Spain and Italy, upset by the crisis, got several guarantees as far as far their respective financial situation are concerned and a direct recapitalization of their banks without passing by the future European Mechanism Stability mainly, at the expense of Angela Merkel who considered the budgetary integration as a condition before any financial solidarity between Member-States, especially within the Eurozone.

The European Council opened the way to a banking union in which the outlines must be precise and refined by Herman Van Rompuy and the European Commission. Nonetheless, it’s a genuine surprise insofar as no early warning signs suggested to such an outcome as Germany maintained her positions as Jean Quatremer, the Libération correspondent in Brussels, reminded it.

The German point of view, intransigent and inflexible, was despairing and exasperating its partners especially, concerned about their national economies and the future of the Eurozone. For the German head of Government, the road to federalism, indispensable it may be, wasn’t feasible without implementing a strong discipline between Member-States, in other words, wholesale austerity.

This policy was questioned by Italy and Spain and also by France even if there was existing a political interest for François Hollande. For the new French president the issue was simple, showing he could extend a pressure on the Angela Merkel position and he had authority enough to impose his own views, the one who declared he wouldn’t ratified the budgetary pact harshly negotiated only if a constituent on growth with clear propositions and commitments was included, during the presidential race. The implementation of the 120 million euro growth pact, conceded by Germany, is in this respect, very important politically speaking insofar as François Hollande can proudly say he forced Angela Merkel to question her position, what explained his relative satisfaction after the Council, the last Friday morning.

Considering as the summit of the last chance during a while, the recent European Council has a merit: the realism displayed by the Italian and Spanish rulers, imposed to Germany. Already focused on the Greek crisis, Angela Merkel didn’t allow to herself to open a second front with other Mediterranean countries and see her popularity decreasing again. The Chancellor is clearly aware of that, if she wishes to impose her views and reinforce her leadership, she is constrained to make some concessions to appear as an accelerator and not as a brake to the European integration.

François Hollande, President of France and Angela Merkel, chancellor of the Federal Republic of Germany

At the end, Germany does not always win, which does not mean it loses its touch as the debate on the Eurobonds showed it and Angela Merkel still rejects even if she adopted a similar policy in Germany. If Germany wants to be the political centre of the Union and the European integration, it must learn to mellow to impose its views better.