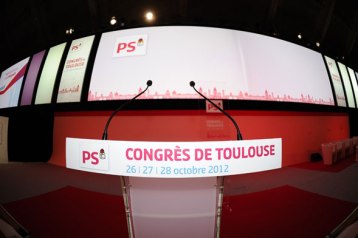 This week-end, the French socialists are gathered for their traditional ordinary congress at Toulouse (south-west of France)

This congress is taking place six months after the victory of PS at the presidential and legislative elections and in which, there are very few skates. Indeed, activists already voted for motions (texts who determine and defend the political strategy and line of the party) and overwhelmingly supported the text defended by Harlem Désir. They also elected him as the new First secretary with a very large majority. Emmanuel Maurel, the challenger now representing the left wing of the PS, got near 30% of the votes.

The French socialists are gathered at the moment Frenchs are more and more wondering about the government current policy as the opinion polls indicate clearly in which François Hollande and Jean-Marc Ayrault are still decreasing. Critics are stronger and stronger from the opposition which does not hesitate to consider the executive as an amateur, questioning the government on its capacity to bring concrete solutions to the French people problems and to show the first signs of change promised by Hollande during its campaign.

Thus, some people are wondering on the opportunity to organize such a Congress, only several months just winning elections, in which socialists just congratulate and encourage the actions led by the Prime minister and its government and he has not the sufficient distance and the lucidity to be critical on his own policy? A Congress in which everything is already prepared and planned and is looking like a parade of ministers and PS executives, competing on the definition of socialism and disserting on the (support) role of the PS in front of the delegates and the cameras?

At the moment French people are more and more doubting on the strategy led by the President of Republic and the Prime minister, the French Socialist Party must ensure and be pedagogic, reminding the initial and main objective of government, the recovery of France with justice. Nonetheless, if the PS must be pedagogic and support the executive, it must be critical which supposes it calls out to the government and relays the French people’s concerns, especially when there are problems.

The Congress of Toulouse might be the venue the French Socialist Party should enjoy to call out to the government and reaffirm his support both vis-à-vis the opposition who wants to take its revenge but still divided between the François Fillon’s supporters and the Jean-François Copé’s friends for the UMP leadership. This is an important skate for the Socialists who have to prove their party is not affiliated to Matignon and the Elysée but a party still in touch with the expectations and the preoccupations of the French population, which requires an open and lucid party.

The next weeks will be important as the first speech of Harlem Désir, the new PS leader he is going to deliverer tomorrow morning at the end of the Congress. He has to prove, the Congress of Toulouse was useful not only for the PS but for whole French people. And if it’s truth it’s more interesting and funny – especially for French journalists – to attend an upside down and punch socialist Congress in which the executives are struggling to get the leadership of the party (as in 1990 and 2008), the fact remains that the rally of Toulouse will be regarded as useful it is not concentrated on the internal issues of the PS but concentrated on French people. The speech Harlem Désir has to deliverer tomorrow will be undoubtedly followed and analysed.